SAN DIEGO, Sept. 29, 2022 /PRNewswire/ -- Rakuten Medical, Inc. (Rakuten Medical) has newly established its subsidiary in India, Rakuten Medical Private Limited (Rakuten Medical India) to strengthen its position in the country and expand its presence worldwide. The Mumbai-based company plans to develop and commercialize treatments based on the Alluminox™ platform in India, beginning with head and neck cancer. To ensure a strong footprint, Mickey Mikitani, Co-CEO of Rakuten Medical recently visited leading medical institutions in the country to exchange views on the current status and future development of cancer treatment. 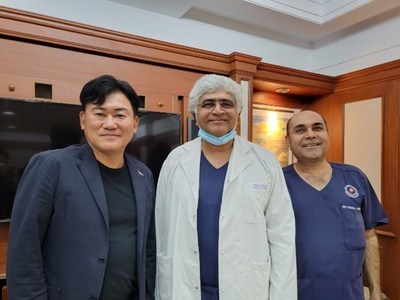 In India, the total number of new cancer patients in 2020 was over 1.3 million – the 4th largest population of cancer patients in the world1. Particulary, there is a high occurrence of head and neck cancer, which accounts for 30% of all cancer types2. India accounts for ~26% of all head and neck cancer cases globally1. The majority of these patients present with advanced disease2, which also corresponds with poorer outcomes and higher mortality rates.

Rakuten Medical's proprietary technology platform Alluminox combines the power of light with drug, device, and other related components to develop new, innovative therapies. Illuminating the targeted cells with non-thermal light activates the cell-bound drug, which leads to rapid and selective cell killing. This therapy has potential to be a 5th pillar of cancer treatment.

"I am very pleased to have established our own base in India and to be able to exchange views with prominent Indian medical professionals. By transforming treatment in India where there is a significant number of cancer patients and high unmet needs in the world, we hope to contribute to the lives of as many patients as possible." said Mickey Mikitani, Co-CEO of Rakuten Medical.

"Rakuten Medical's technology has an unprecedented mechanism of action that selectively and precisely attacks targeted cells," said Dr. Rajendra Achyut Badwe, Director and Head of Surgical Oncology at Tata Memorial Centre. "We are delighted that Rakuten Medical is bringing its completely new cancer treatment to India. We will collect robust data to ascertain efficacy as well as effectiveness of this novel therapy in head and neck cancers."

Dr. Devi Prasad Shetty, Founder and Chairman at Narayana Health said, "We are welcoming the pioneering technology of Rakuten Medical, which will potentially help people in India lead healthier lives, and happy to support Rakuten Medical in its mission to 'Conquer cancer'."

About Rakuten Medical, Inc.
Rakuten Medical, Inc. is a global biotechnology company developing and commercializing precision, cell targeting investigational therapies on its Alluminox™ platform, which, in pre-clinical studies, have been shown to induce rapid and selective cell killing and tumor necrosis. Outside of Japan, Alluminox therapies have not yet been approved as safe or effective by any regulatory authority. The company's first drug developed on the Alluminox platform, ASP-1929, has received approval from the Japanese Ministry of Health, Labour, and Welfare, and is currently the subject of a global phase 3 clinical trial for recurrent head and neck cancer. Rakuten Medical is committed to its mission to conquer cancer by delivering our innovative treatments as quickly and safely as possible to as many patients all over the world as possible. The company has offices in 6 countries, including the United States, where it is headquartered, Japan, the Netherlands, Taiwan, India, and Switzerland. For more information, visit www.rakuten-med.com.

About Alluminox™ platform
The Alluminox™ platform is an investigational platform based on a cancer therapy called photoimmunotherapy, which was developed by Dr. Hisataka Kobayashi and team from the National Cancer Institute in the United States. Rakuten Medical is developing the Alluminox platform as a technology consisting of a drug, device, and other related components. The drug component of the platform consists of a targeting moiety conjugated with one or more dyes leading to selective cell surface binding. The device component consists of a light source that locally illuminates the targeted cells with non-thermal light to transiently activate the drug. Pre-clinical data have shown that this activation elicits rapid and selective necrosis of targeted cells through a biophysical process that compromises the membrane integrity of the targeted cells. Therapies developed on Alluminox may also result in local and systemic innate and adaptive immune activation due to immunogenic cell death of the targeted cancer cells and/or the removal of targeted immunosuppressive cells within the tumor microenvironment. Outside of Japan, Alluminox therapies have not yet been approved as safe or effective by any regulatory authority.

Forward Looking Statements
This press release contains forward looking statements that correspond to the safe harbor provisions of the Private Securities Litigation Reform Act of 1995. These statements include various risks, uncertainties, and assumptions that may cause Rakuten Medical's business plans and results to differ from the anticipated results and expectations expressed in these statements. These "forward looking statements" contain information about the status and development of our products, including the Alluminox™ platform, as well as other regulatory and marketing authorization efforts, the potential benefits, efficacy, and safety of therapies created using the Alluminox platform, and the status of regulatory filings. The approval and commercial success of the product may not be achieved. Forward looking statements relate to the potential benefits, efficacy, and safety of our therapies, and the status of regulatory filings. Such statements may include words such as "expect," "believe," "hope," "estimate," "looks as though," "anticipate," "intend," "may," "suggest," "plan," "strategy," "will," and "do", and are based on our current beliefs. In addition, this press release uses terms such as "important," "notable," and "abnormal" to express opinions about clinical trial data. Ongoing clinical trial studies include various risks and uncertainties, in particular, problems that arise during the manufacturing stage of our therapies, the occurrence of adverse safety events, situations in failure to demonstrate therapeutic benefits, and other various risks and uncertainties, both reasonable and unreasonable. For this reason, actual results, including regulatory approvals and uncertainties in the commercialization process of our therapies, may differ from published information. Except to the extent required by applicable law, we undertake no obligation to publicly update this or any other forward-looking statement, whether because of new information, future developments or events, changes in assumptions, changes in the factors affecting forward-looking statements. If one or more forward-looking statement(s) is updated, no inference should be drawn that additional updates will be made to those or other forward-looking statements. 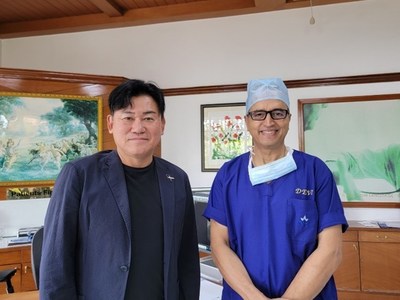